This repository contains the nessecary Python scripts to train and run a deep neural network to perform upsampling on an audio waveform. This upsampling (also known as super-resolution) learns to infer missing high frequencies in a downsampled audio waveform and is based on the work presented in this paper.

Audio super-resolution aims to reconstruct a high-resolution audio waveform given a lower-resolution waveform as input. There are several potential applications for this type of upsampling in such areas as streaming audio and audio restoration. A non-deep-learning solution is to use a database of audio clips to fill in the missing frequencies in the downsampled waveform using a similarity metric (see this and this paper). However, there is recent interest in using deep neural networks to accomplish this upsampling.

There are a variety of domains where audio upsampling is useful. Since I focused on a potential voice-over-IP application, the dataset I chose for this repository is a collection of TED talks about 35 GB in size found here. Each talk is located in separate files with bit rates of 16 kbps which is considered high quality for speech audio. This dataset contains primarily well-articulated English speech in front an audience from a variety of speakers. These qualities regarding the TED talks are an approximation to what one may expect during a voice-over-IP conversation.

The preprocessing steps are outlined in the above figure. The first and last 30 seconds from each file are trimmed to remove the TED logo. The files are then split into 2 second clips and a separate, 4x downsampled set of clips at 4 kbps are created along with a set at the original 16 kbps. 60% of the dataset are used during training while 20% are reserved for validation and 20% for testing.

The training workflow outlined in the above figure uses the downsampled clips of the data preprocessing steps and batch-feeds them into the model (a deep neural network) to update its weights. The model with the lowest validation score (denoted "Best Model") is saved for later use.

The process of using the "Best Model" to upsample an audio file is given in the above figure. This workflow takes whole audio files, splices them into clips similarly to the preprocessing steps, sequentially feeds them to trained model, stitches the high-resolution clips back together, and saves the high-resolution file to disk.

The model architecture is a U-Net that uses a one-dimensional analogue of subpixel convolutions instead of deconvolution layers. The downsampled waveform is sent through eight downsampling blocks that are each made of convolutional layers with a stride of two. At each layer the number of filter banks is doubled so that while the dimension along the waveform is reduced by half, the filter bank dimension is increased by two. The bottleneck layer is constructed identically to a downsampling block which connects to eight upsampling blocks which have residual connections to the downsampling blocks. These residual connections allow for the sharing of features leanred from the low-resolution waveform. The upsampling blocks use a subpixel convolution that reorders information along one dimension to expand the other dimensions. A final convolutional layer with restacking and reordering operations is residually added to the original input to yield the upsampled waveform. The loss function used is the mean-squared error between the output waveform and the original, high-resolution waveform. 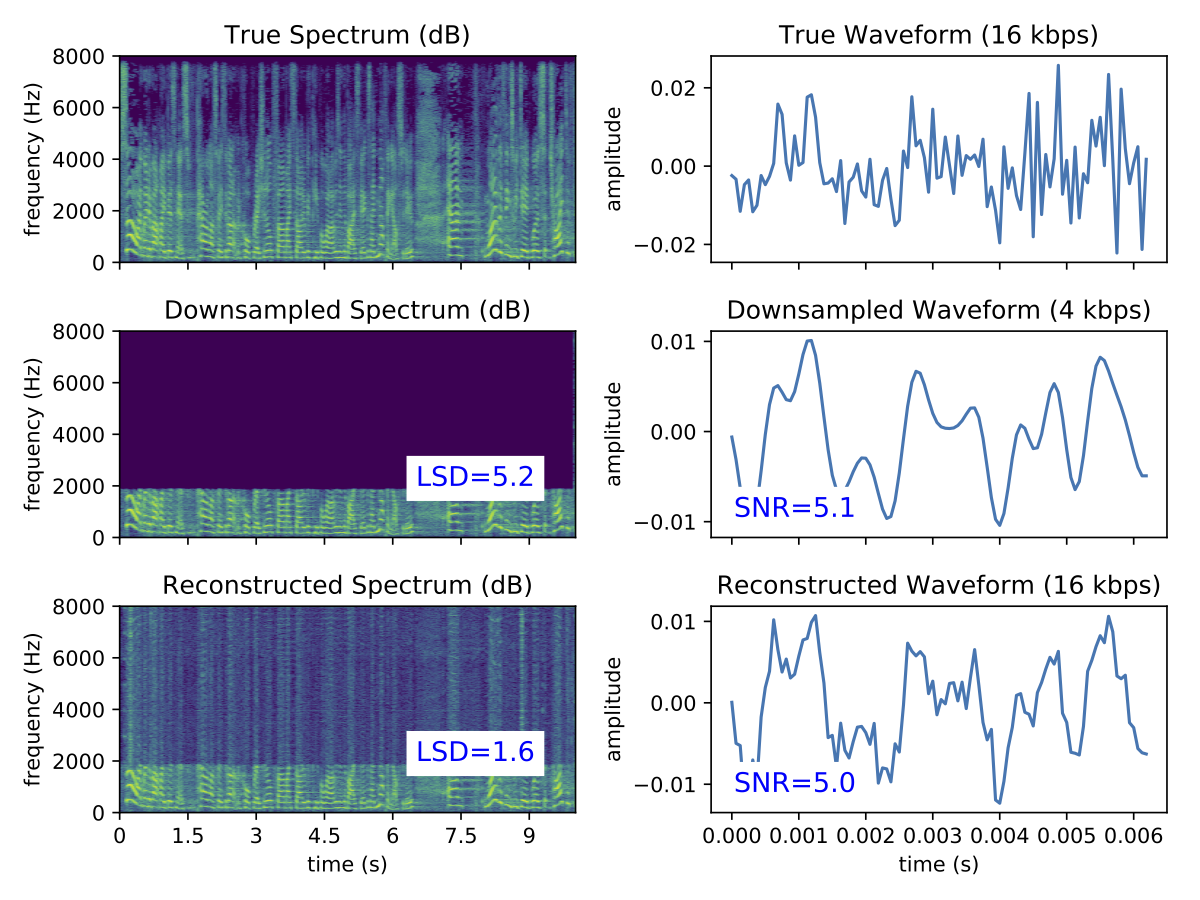 The above figure shows two quantitative measures of performance on a test sample after 10 epochs of training. On the left column are spectrograms of frequency versus time, and on the right are plots of the waveform amplitude versus time. The first row contains the spectrogram and waveform plots for the original, high-resolution audio sample. The middle row contains similar plots for the 4x downsampled version of the original audio sample. Notice that 3/4 of the highest frequencies are missing in the downsampled frequency plot. The last row contains the spectromgrams and waveform plots for the output of the trained model. Inset are two quantitative measures of performance: the signal-to-noise ratio (SNR) and the log-spectral distance (LSD). Higher SNR values represent clearer-sounding audio while lower LSD values indicate matching frequency content. The LSD value shows the neural network is attempting to restore the higher frequencies wherever appropriate. However, the slightly lower SNR value implies that the audio may not be as clear-sounding.

Make sure the required software is installed. To compile the custom C++ library that enables fast subpixel convolutions, cd into the src directory and run the COMPILE_FROM_BINARY Bash script. This should be all that is required to run the upsampling script.

Since GitHub doesn't allow for files larger than 100 MB, the model must be retrained in order to perform the upsampling.

The Python scripts used to preprocess the data, train the model, and run the upsampling are configured using JSON files located in settings folder. This isolates much of the logic from the model hyper-parameters and system-specific details. Here is a list of the different configuration scripts

The steps to training the model are:

After running the training (which likely takes several days), the upsample_audio_file script can be used to upsample a WAV formatted audio file from 4 kbps to 16 kbps. The settings for this script are found in the upsampling_settings JSON file.

The following packages are required (the version numbers that have been tested are given for reference):